THE BATTLES OF LAWRENCEBURG AND DOGWALK

Dogwalk "was a great deal harder fight than Shilo [sic] was according to the number engaged". ​ ​
​ Pvt. Alpheus.S. Bloomfield - 1st Ohio Light Artillery -letter to his father (1).
The skirmishes at Lawrenceburg and Battle of Dog Walk, located in Anderson County, Kentucky, are like most Civil War battles, not very known and important to only those who fought them - and for those who made the ultimate sacrifice, their families. The battles are a part of our history and as such, they must not be forgotten.

The skirmishes occurred just after the high point of the Confederate State’s Kentucky Campaign of 1862 October 4th, 1862. The Confederacy had occupied the Kentucky State Capital of Frankfort and installed Richard Hawes as Kentucky's second Confederate Governor. Celebrations and speeches were being made by the  when from the hills overlooking Frankfort, a section of Battery E of the 1st Ohio Light Artillery Union gave their own brand of salutation to Gov. Hawes with cannon fire as part of the advance guard of General Joshua Sill's drive to retake the capital of the Bluegrass. (7)

Realizing that the possibility of holding the Kentucky Capitol was small, the Confederates, and their newly installed governor, evacuated the city during the night and headed into Woodford County.  Cavalry units under Colonels Benjamin Allston and John S. Scott moved through Woodford County crossing the Salt River into Anderson County at McCown's Ferry, just Southeast of Lawrenceburg. The Confederate Infantry proceeded south into Anderson County.

Union forces moved into Frankfort on October 5th and remained their during the 6th and 7th of October, before moving toward the town of Rough and Ready (the present day community of Alton) northwest of Lawrenceburg. Sill's forces continued to make their way South along what is now US127/Hwy 151, toward the small farming community of Lawrenceburg, Kentucky.
The Battle of Lawrenceburg took place on October 8, 1862 just south of town at what was then the “Old Cemetery” and what is now the site of the Lawrenceburg City Cemetery. Union artillery and Infantry were deployed along a ridge facing South on the Stringtown Road, (now US 127). The Confederate Cavalry under the command of Col. Allston approached heading north. After a small back and forth exchange the Confederate troopers retired South down Stringtown Road.  Being in a fixed position, the Union forces did not pursue.

While the Battle of Lawrenceburg was being contested, Gen. Sill's supply wagons were making their way from Frankfort towards Perryville. Upon reaching Lawrenceburg on the 8th, Sill's column discovered the ongoing skirmish.  Wishing not to be delayed or engaged, they changed course and head West on Chesser's Store Rd. (present day US62 or Broadway).

The Confederate Cavalry did not dislodge the Federal position at the Cemetery South of Lawrenceburg and retired South down Stringtown Rd.  The troopers proceeded West on what is now Hwy 513, which intersects Chesser's Store Road (US 62) in the small community of  Fox Creek (Dog Walk). It was here that the Confederate Cavalry, now under the command of Col. Ashby was waiting for Gen. Sill's supply wagons. Thus begun the Battle of Dog Walk (aka the Battle of Chesser's Store, the Battle of Dry Ridge or the Battle of Salt River).   By the end of the day, fifty eight of Gen. Sill's wagons were captured and burned and some 600 Federal prisoners were taken.  The Battle of Dog Walk, October 9th, 1862, fought the day after Perryville, was a Confederate victory.  However, like so many battles in the Civil War where men fought, and bled, and died, it was overshadowed by other events and proved decisive only for those who were lost.

Excerpt from Atlas to Accompany the Official Records of the Union and Confederate Armies showing location of Chesser's Store circled in red. (10) 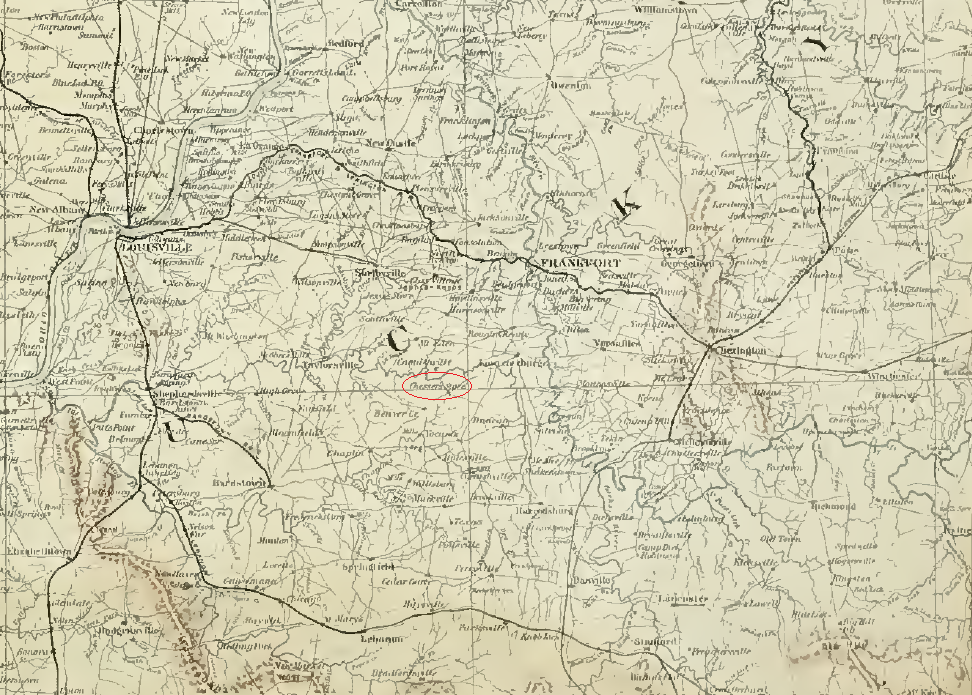